It’s no surprise that more people are prepping for SHTF Events these days. High profile assassinations have been carried out by de facto authoritarian regimes, geopolitical relations continue to dissolve, and looming threats like the reckless development of technology could spell the end to humanity’s claim to being the most intelligent among Earth’s inhabitants. These developments have scared the California Elites (CEs), hedge funders, and other members of the 1%. Some ridiculous prepper products and services are now on the market to address these fears.

The only thing more outrageous than spending over a thousand dollars on a handbag is spending over a thousand dollars on a luxury bug-out bag. Preppi (yes, that’s really the name of the company) sells “survival gear” to the ultra rich. While not the most expensive product on the list, the bag comes with designer lotions, a monogram, and a caviar case. It could be yours for just under $5,000. 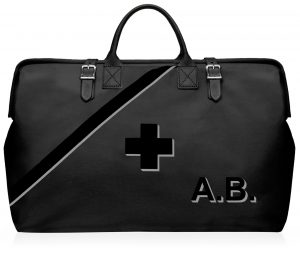 Manhattan is the home of the bankers, so it may not be a shock to learn about their indulgent prepping purchases. Plan B Marine leases boats docked along the perimeter of Manhattan to their wealthy customers. With a tagline like, “Every Good Chief Executive Needs a Plan B,” Plan B Marine makes it clear who their clientele is. Their boats are leased for $4,500 to $7,500 a month. I’ll save you the effort of the math: the service runs from $54,000-$90,000 annually. I could imagine that with this investment, the bankers actually want there to be a SHTF moment.

When a company’s website doesn’t publish prices, you know their products are incredibly expensive. That happens to be the case for this two person Survival Capsule, which is marketed as protection from natural disasters. Now I’m all for protection, but a survival capsule that I can only pre-order certainly isn’t the type of protection I’m looking for. You can rest assured that the CEs will get in line to add a toy like this to their collection. However, government rescue operations may be a practical application for this product.

You all know I’m a big fan of bunkers, but I do draw the line somewhere. The line is drawn at the Atlas Missile Silo turned Luxury Condos. A full floor unit is a cool $3,000,000. Now I understand the urge to purchase some SHTF insurance, but $3 million is absurd! The unit is 1820 square feet, has an automation system, a “simulated view” of the outdoors, biometric key locks, and more. You can rest assured that the 1 percenters making this purchase won’t need to make any post-Event sacrifices.

Peter Thiel, a President Trump supporter, doesn’t plan on living his life in America if SHTF. He and other CEs are becoming joint US-New Zealand citizens, so they can buy up land. The isolated island, by some estimates, is the intended insurance policy for about half of the Silicon Valley billionaires. Rather than being a man of the people, Thiel and his CE associates had to invest NZ$10,000,000 (roughly US $6.75 million) in the country over three years in order to gain permanent residency. With the cost of residency already twice as the above luxury condo, this prepping purchase is definitely the most impractical.

Have any additional impractical prepper products? Contact me to share your suggestions in the comments section. You can also head to the Bunker Basics Store to get some gear with a bit more utility.