Less than a month ago, a “city killer” asteroid whizzed by Earth, shocking scientists. The asteroid, known as Asteroid 2019 OK, wasn’t tracked by scientists until just days before it passed by within 45,000 miles of the Earth. In the great expanse of space, 45,000 miles is a very close call, especially with such little forewarning. What if we don’t get so lucky next time? What are the chances of an asteroid strike and can we even prepare for one? Below I detail the probability of an asteroid strike, how we’re monitoring asteroids, and what we can do if an asteroid is headed towards Earth.

What’s the Probability of an Asteroid Strike?

In 2013, a 65 foot asteroid exploded in the atmosphere above the Russian city of Chelyabinsk. The damage was relatively minor, though the event is an example of just how real the threat of asteroid strikes are. In the 20th century, there were 3 recorded asteroid strikes. Based on these past events, we can say with a large degree of confidence that an asteroid will strike within our lifetime. In fact, NASA administrator Bridenstine emphasizes that we need to take the threat seriously. A NASA model suggests that an event like Chelyabinsk can be expected to happen once every 60 years. Given the high probability of an asteroid strike, how are we monitoring these potential meteorological threats?

How Do We Monitor Asteroid Activity

In 1998, Congress mandated that NASA monitor near Earth objects, or NEOs. NEOs are defined as space rocks within 30 million miles of Earth’s orbit. A NASA study found that NEOs 3,300 feet or larger, which could end the world as we know it, only strike the Earth once every 700,000 years. Roughly 90% of these asteroids are being tracked. Smaller asteroids, though, are more difficult to monitor and can still have devastating effects should they strike the Earth. As a test, NASA scientists simulated millions of scenarios where a fake asteroid 600 feet in diameter, 2019 PDC, struck the Earth. Testing parameters were input to have the asteroid strike the Atlantic ocean, Manhattan, and uninhabited land. Such strikes would cause tsunamis, unsurvivable conditions, or little impact at all; respectively. If an asteroid were headed towards Earth, how would we know which scenario we’d need to contend with? 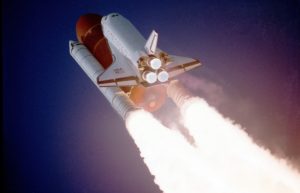 It takes over a year of monitoring an asteroid for scientists to know where it’s headed. That said, if an asteroid is on a collision course towards the Earth, a proactive effort to avoid a collision would take years to launch. As discussed above, we don’t always have years to mount our response to the threat of an asteroid strike. The truth is, we need to get even better at tracking dangerous asteroids as a means of ensuring we can prevent catastrophes. We’ll next discuss the potential mechanisms of prevention.

What Can We Do if An Asteroid is Headed Towards Earth?

Movies like Armageddon depict asteroids headed straight towards Earth can be steered off course by technology and heroics. Is this really the case? Can we simply fly Bruce Willis into outer space and expect him to save the world? Scientists propose we can arm a spacecraft with a nuclear device capable of disrupting an asteroids trajectory. While it seems straightforward to have a nuclear explosion knock an asteroid of course, there are some complications. For one, the asteroid can break apart, sending numerous smaller, yet deadly asteroids towards our planet. While any one impact would not be as large, the multiple impacts could still prove devastating. The second complication is of a political nature. Who is actually responsible for protecting the terrestrial from extra-terrestrial threats?

The Space Mission Planning Advisory Group, or SMPAG, is a United Nations entity responsible for responding to potential impact events. The membership notably excludes African countries, which could potentially be the target of an asteroid strike. Should, then, the representatives of the site of a potential asteroid strike be included in the mitigation effort? Can a group of countries effectively coordinate the launch of nuclear bombs into space? The above mentioned 2019 PDC simulation illuminated the difficulties involved in averting a potential crisis of this variety. If efforts to avoid a collision are unsuccessful, can we even avoid the loss of life?

Let’s discuss the scenario where an asteroid is speeding towards Manhattan. The asteroid cannot be stopped, so we need to evacuate a city populated by over 1.6 million people (excluding the outer boroughs). The following problems (amid thousands of others) would need to be addressed:

No government, whether it’s at the national, state, or municipal level, truly has a SHTF plan for 1.6 million residents. Such a scenario would result in widespread chaos, which we may never recover from. The 2019 PDC simulation was hopefully just the first of many. We need to get to the point where all asteroids posing a threat to humanity can be detected and tracked years in advance. A risk mitigation plan must be developed and tested, so we never have to contend with the Manhattan evacuation problem. This, of course, will require global coordination, funding, and consensus. Given the momentary shakiness coursing through our global politics, it’s best we resolve the issues identified by the PDC simulation immediately.

What do you think about our readiness for a potential asteroid strike? Leave a comment below or contact me directly.

How to Introduce Emergency Preparedness to Your Family