Bunkers are defined as reinforced underground shelters, typically for use in wartime. Bunkers became especially popular during the Cold War, as the risk of nuclear attacks seemed very real. Large-scale bunkers, like the one constructed at Greenbrier, were built to protect government officials. That said, the construction of bunkers predates the Cold War. In fact, the construction of bunkers predates modern civilization. To better understand some of the most ancient bug out bunkers, we’ll need to look underneath the soil in Turkey. 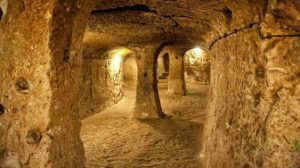 invasion. The underground city reaches a depth of 250 feet and was home to 20,000 people. Derinkuyu was carved out of solidified volcanic ash, which proved to be ideal material for the subterranean labyrinth. Scholars believe Derinkuyu could have been created as early as 1200 BC. Cleverly, Derinkuyu was equipped with slats from which soldiers could shoot out arrows at invaders. This early bunker didn’t just serve as protection for the townspeople. Their goats, sheep, and cattle lived with them underground as well.

You may recognize Petra from Indiana Jones and the Last Crusade. Similar to Derinkuyu, Petra was housed over 20,000 people. The famous ancient habitation has structures, like Al Khazneh, built into a Jordanian mountain. The Nabataeans, the Arab nomads that built Petra, didn’t just carve incredible monuments out of mountains. They also built an underground city. In 2016, a massive underground structure was discovered beneath the Petran sands. The structure has 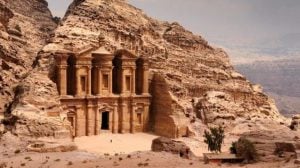 yet to be excavated, so we have will need to wait to fully appreciate the scale and complexity the Nabataeans’ invention.

Adolf Hitler’s most famous bunker is the Fuhrerbunker, a 3,000 square foot complex built beneath the ruins of the Berlin Chancellery. Prior to spending out the last few months of his life in Fuhrerbunker, Hitler resided in a network of bunkers in East Prussia. Russia’s advance on Germany caused the Nazi leader to grow increasingly paranoid. His right-hand man, Joseph Goebbels described him as follows:

“He no longer gets out in the fresh air, no longer has any relaxation; he sits in his bunker, acts, and broods….” –Fest, Joachim. Hitler. 2013.

Hitler’s brooding ended with his final, most cowardly act. In Hitler killed himself in Fuhrerbunker with a cyanide capsule and a shot to the head. He demanded his soldiers cremate his body to prevent the Russians from desecrating it after his death.

During the Cold War, Joseph Stalin had a fortress built within a hillside near the Kremlin. It was built 165 feet below the ground, which, scientists believed, was deep enough to protect it from nuclear fallout. The bunker, code named Bunker 42, was completed in 1956 and never served its intended purpose. Instead, Bunker 42 operated as an airstrike command base for the next 30 years. It is now a historical monument.

Stalin’s Bunker 42 certainly wasn’t the only Cold War bunker. Just weeks after construction began 1961, John F. Kennedy’s bunker on Peanut Island was completed. The Kennedy Bunker was located a 15 minutes helicopter ride away from the President’s Florida home. The timing of the construction seems appropriate in hindsight, since the Cuban Missile Crisis erupted in October 1962. Disaster was narrowly avoided, but the Kennedy Bunker remains a reminder of the close call.

The above bunkers are just few of the thousands that have been built over the centuries. As tensions escalate as they did during the Cold War, large scale bunker projects are undertaken. We should take notes from government decision makers: a secure location is an insurance policy against the threat of disaster. While a fortified bunker may not be warranted, it’s important we have some form of secure location we can escape to should SHTF.

Do you want to discuss bunkers that have been constructed throughout history? Leave a comment or contact me directly.

How to Keep the US-China Cold War From Getting Hot

What Bunker is Right for Me?